Berwickshire Housing Association (BHA) are committed to building almost 100 homes for their community by the end of 2020. BHA handed over 30 homes through Acredale Phase 3 just in time for Christmas last year, which included: a mix of two and three bedroom family homes, single bedroom flats, and wheelchair accessible housing. This housing project provided much needed accommodation to allow the local town to develop and grow. Through this and additional projects, BHA have been trialling a new type of accessible property to meet local demand. Hart have supported them with this and their suggestions led to an improved buildability and functionality of the new housing design.

Hart Builders Ltd were appointed to the project and they worked closely with BHA to ensure the second phase of this project was smoothly and efficiently undertaken. As the procurement had been completed by SPA through the framework agreement, Hart Builders were able to start the main contract 3 months later with the project being completed within 18 months from inception.

Due to the legacy of the first phase of this development, Hart Builders inherited a number of outstanding issues and the local community had become frustrated with this project. Through Hart Builders and BHA’s collaborative partnership from the outset, they received many compliments from those in the community who had previously complained about the previous phase.

As Hart Builders had not been on the project for the previous phase, they had to incorporate legacy issues but these challenges were tackled head on by Hart Builders and BHA. In order to improve site access and a lack of mains gas supply a new access road was negotiated and constructed, as well as, re-designing the heating systems to incorporate air source heat pumps and photovoltaic panels. The photovoltaic panels were installed on the cottage flats to assist in achieving the SAP calculations and to provide the residents with a far greater level of energy efficiency and reduced running costs and to help safeguard against rising electricity costs and fuel poverty.

The success of this, and earlier projects with BHA, have led to a strategic partnership between Berwickshire Housing Association and Hart Builders and a further 5 sites are in the pipeline for delivery before the end of March 2021. These sites total a contract value of just under £10M and will provide just over 90 additional much needed affordable housing units.

"We are delighted that these 30 new homes have been built in Eyemouth to high energy efficient levels and provide much needed affordable homes in the area. These homes are designed to a high standard for the comfort of the families living in them.” Angela Taylor, Property Director at Berwickshire Housing Association

SPA’s highly successful NH1 Framework was renewed in May 2019 as the NH2 Offsite Construction of New Homes Framework, which runs until April 2023. Like all SPA Frameworks, NH2 is fully OJEU compliant. 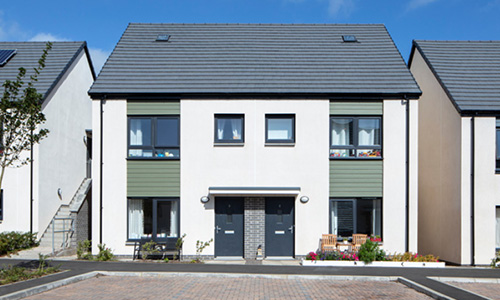 Back to case studies
Back to top